The Unanimous Declaration of Independence 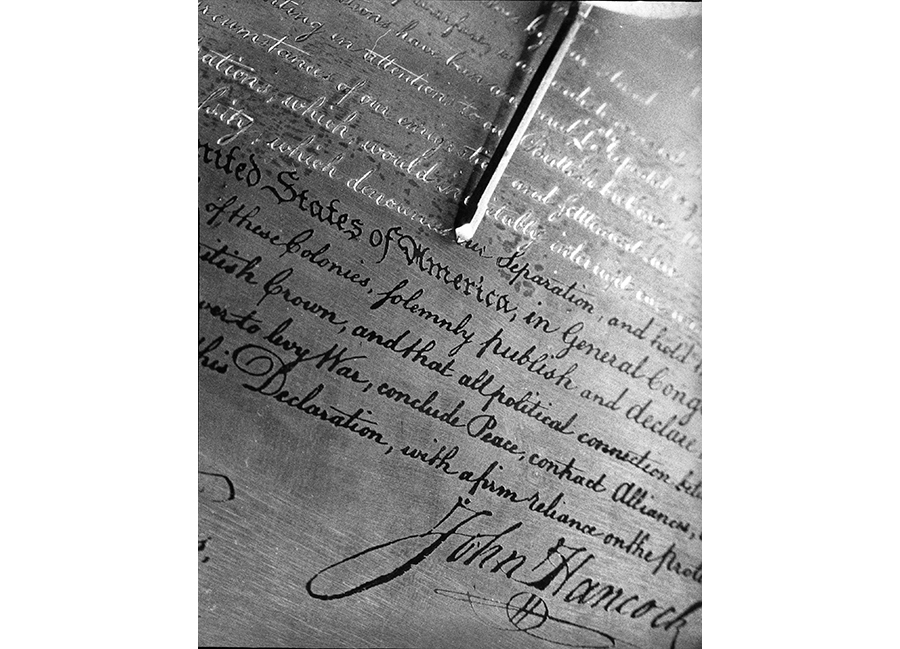 The design is manually incised into an engraving plate using a burin, an engraving tool like a very fine chisel with a lozenge-shaped tip. The burin makes incisions into the metal at various angles and with varying pressure which dictates the quantity of ink the line can hold – hence variations in width and darkness when printed. The technique of engraving metal dates from classical antiquity as a method of decorating objects. However it was not until about 1430 in Germany that engraved plates began to be used for making prints.

Like etching and aquatint, engraving is an intaglio technique. Intaglio refers to all printing and printmaking techniques in which the image is incised into a surface, and the incised line or sunken area holds the ink.

This work of art reproduces the character and calligraphy of a document that shook the world in 1776 and continues even today to offer inspiration to freedom-loving people everywhere.

Every engraving bares the raised seal of artisans participating in the process. These were pulled by the late Maestro Arturo Garcia of Taller Mayor in Madrid using a brass plate hand- chiseled by Perico Aspiazu of Elgoibar in Spain’s Basque Country. Their acid-free paper – at 500 grams, slightly over a pound in weight – was formulated and made especially for the Declaration by the Basque paper maker Villabona.

Each engraving is 31” x 33” and is accompanied by a Certificate of Authenticity signed by Jose-Maria Cundin. Individual numbers indicate their order in this limited edition of 5000. However, as Millenia III wanted every facsimile to be of the same quality as the first, the edition was limited to only 1200 to assure purchasers of a perfect print. Our signed Amendment confirming this accompanies every engraving, which are shipped unframed, covered by acid-free paper in a corrugated cardboard folder, 34”x 38”.

In repeating in exacting detail the courageous and hopeful calligraphy of this great manifesto, in carving the lines, the arcs, and the flourishes of these noble words and signatures, we hope that our artistry has honored both the United States and the principles upon which this great country was founded.

For more details on this work, contact the artist.